Tell Caroline you have a request, and your weapons will look their best! -- Bonzz

Search Bonzz's Site by typing a keyword(s) in the box below.

This quest is for weapon ornaments and achievements.

It will also give you a special and unique ornament for your class.

The first character to earn the special ornament, on each server, was honored with a system wide announcement, as well as a permanent display with their name on it, in Felwithe (you can see and examine them on the walls near the quest giver, see below). This simply a wall mounted display that looks like the ornament. Click the display and it will produce a comment in your chat window that reveals the name of the player that was first to get it on your server.

I am pretty confident that this has already been done by all class types, on every server... so don't get your hopes up. 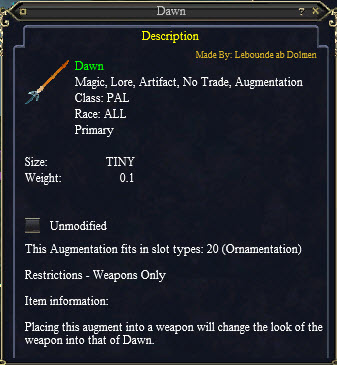 1) FELWITHE: Head to Felwithe to find Lady Caroline of Thex.

You will see her up on the gate balcony as you enter the city. It does not appear she will respond unless you actually go up on the balcony.

To get there, go straight into one of the doorways ahead of you and go to the lower level. There is a secret wall in the back-center of the room down there. Go through it, turn right and wind your way to her.

Hail her and follow along, or just say, "I have an interesting tale to tell."

You should get a task called "An Epic Request."

This task is the same for every class, except for one (1) step. That one step will involve a special event in one of the 16 locations you need to go for the updates.

2) You now need to travel to all 16 locations, for the updates, one of which will include the special event for your class (the update happens after the event is defeated), as follows:

Despite the number of MOB's or their con-level, a Level 105 Paladin should have no problems doing this solo, even without a mercenary.

As you zone in, you will get an emote telling you to speak with a froglok (Shin Bram Krito) lying by the pond ahead of you. If you simply try to run into the zone, you will be banished back to the zone line.

Hail Shin and it will activate the sequence of events (you may need to use F8 to target him for the hail).

You will then be attacked by two vampires. After they are dead, two werewolves will attack you.

The next encounter will be in the canyon on the way to the graveyard, where you will face one (1) specter, followed by then two (2) more specters.

At the graveyard, you will encounter two versions of the undead hag, Tiffany. When they are dead, you will face a wave of as many as 18 zombies (don't let that scare you).

Next up will be Guard Captain Alkirk.

Now it's time to go up the ramp, into the castle and into the back of the ball room where you will first face three (3) gargoyles. Use stuns to weaken and damage them until they are dead.

You will then be attacked by Drelan V'Dal. Once he is dead, Debra will attack you. Once she is dead, Xicotl will summon you to him and attack.

When Xicotl dies, head to the basement to the dead end room... but first make sure you have at least one stun and a direct heal loaded up on your spell bar.

As you enter the back of the room, Agent of The Third will stun you (you will not be able to move), summon Shin into the room and then get taken out by The Third.

The Third will then attack you as you are able to move again. To defeat The Third, stun him (stun spells only, it seems -- not AA stuns) and then throw a heal towards Shin who will use the moment to damage The Third. After a few rounds of this, it will be just you versus The Third, who will die pretty quick to your slay undead.

Once he is dead, the update will take place.

3) FELWITHE: Head back to Lady Caroline of Thex.

Hail her to finish the task and claim one of your epic ornaments.

2) This time, claim a different version of your epic ornaments.

You can always hail her and follow along, or say "Gift," to be awarded the ornaments again (should you need to re-acquire them or desire to get all four).

You will also complete: Achievement: An Epic Request.

1) Repeat the same task / quest again (see above, keyword "Retelling"), and bring your epic (the actual sword) with you.

2) CASTLE MISTMOORE: This time, you have to be more careful with the event.

The event must be successfully completed in a manner that includes a special variation which is not outwardly obvious (this is true for every class, in their own events).

Careful reading of the emotes and observations of what happens with certain MOB's, are the only clues you will get.

With Paladins, the secret is allowing the MOB's to change form and the use of stuns.

To accomplish this, do not have a mercenary active, unless it's a healer.

Make sure you have the previous ornaments on you (I don't know that this is actually required, but it is the first notation in the bottom window of the task).

Equip your epic (sword), as this is also a suggested thing to do in the last battle (I don't know that this is required either, but it will cover the bases, just in case).

What is required, for sure, is allowing the MOB's that can change form, to change form (one in particular, if not all of them). This is where things can go bad.

Do not directly attack them. Let them die to your damage shield as best you can. They need to die slowly so that their forms changes can take place.

The MOB's that can change form are the vampires and werewolves by the pond, Guard Captain Alkirk, the Guardian Gargoyle (all three), Drelan V'Dal and Debra. Several of them change form twice. The form changes are merely a regressions to older graphics models of the past.

One key MOB for this form changing is Drelan V'Dal. When you are engage with him, take turns stunning The Left Hand and The Other Left Hand (they are on the piano) until you see the message that his true form as been revealed.

If you do this right, once the entire event is defeated and you get your task update, you will see the message:

"Your resourcefulness in all things that make you a holy knight should make for a more interesting telling of this tale."

If you do not see that message, something went wrong! Drop the task and start over.

Luckily for Paladin's, Castle Mistmoore is only two zones away from Felwithe, so trying again is not a huge burden.

3) FELWITHE: Head back to Lady Caroline of Thex.

Hail her to finish the task and claim one of your new ornament, Dawn.

You will also complete: Achievement: An Epic Retelling.

If you note any errors, misspellings, item name errors, misinformation or anything that needs addressing on this page -- PLEASE let me know via an in-game EQ Message (Bonzz on the Bertoxxulous server), or post on Bonzz's Discord Server!